A brief history of Cody Inn

The original house was built in 1905 as a private residence. In 1921 it was converted into a hotel and re-named The Windsor House. This was purchased, circa 1975, by Francis Cody, who named it Cody Inn. In 2000 it was re-sold, and turned into a restaurant, under the same name. The current owners, Richard Lam and Ken Young, purchased the property in 2007 and maintain it as a restaurant.

Living luxe on the lake!

In the twenties, The Windsor House became well-known as a luxurious fishing lodge. Folks from as far away as the States would come to enjoy a taste of fine living. Their day would start with a hearty breakfast, shared by the guides, at 8 a.m. Then the day’s work – catching dinner – began. Dinner, which was also shared by the guides, was yet another fabulous feast. The day’s catch was served, of course, along with a large assortment of meats and delicious desserts. After dinner, guests retired to the sitting room, located where the back dining room is now, and swapped incredible tales of the ones that got away, and the ones that didn’t!

An eye for detail

Service at the Inn was impeccable. During the twenties, the women who worked for the owner learned to spot the slightest imperfection, and take care of it immediately. A story is told about the daily inspection of the sheets for every bed in every room. They were examined minutely and even the slightest sign of a broken thread was darned – on the spot!

All in the family

Today, many of the families of Cody Inn’s original guests still come back to visit and enjoy a fine Oriental meal. Many of the local folk, too, remember being told tales by their families of just what times were like “up at the inn” back then. Memories they’re happy to share with anyone who’s interested enough to ask.

Continuing the tradition of excellence

Richard Lam and his partner bought Cody Inn in 2007. They have since leased the restaurant in 2015 to Shao Ying Pan, the head chef since 2007. Creating delicious food that is enjoyed by visitors to the area, as well as the people who live here all year round. Food that’s so good it’s become a byword for excellence throughout the Kawarthas. 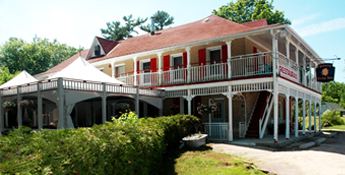 Note: Covid hours are currently in effect due to the on going pandemic. The hours are from 12pm to 8pm. Closed on Tuesdays. Take out only during Covid time.